Ghada was born in Tunisia and has spent most of her life there as an auxiliary and caregiver. When she arrived in 2007 in France for family reasons, she first wanted to learn the language in order to find a place to live and a job. Several obstacles stood in her way, but she was able to overcome them thanks to hard work and her "desire to get out of it", by surrounding herself with the right people and by participating in several programs and community training programs. Today, Ghada is at the head of a world cuisine restaurant and a solidarity grocery store!

Her “tip” would be, for migrant women, to never neglect their skills : “integration on one side is always unfair. All the people who come from all over the world have skills. We can always learn from each other”.

The two main challenges that she faces when she arrived in France and that she wanted to work on during the FemTalks Forum programme were :

But thanks to her multiple resources and desire to make it, Ghada was able to put in place multiple strategies to resolve these conflicts. She testifies: “I got in touch with a lot of associations that encourage women, that explain to them a little bit the path, the difficulties, that listen to them, that give them advice, that was very important. I advise women not to neglect their know-how, to advance through their know-how. It is important, when you master things you should not neglect it. I said to myself, I want to, I'm going to succeed, I want to succeed, so that also helped me, the will and then the desire to get out and to integrate. With FemTalks, I met other women who had similar paths, who had encountered the same obstacles. Together, we were able to discuss it and exchange resources, and leave with more confidence in ourselves and in the future!"

About her participation in FemTalks Forum, Ghada says she has only positive memories of an experience that helped her feel more comfortable with her body ("theatre makes you face yourself and others, without judgments. I usually hide my body as much as possible, but having to play and take positions in front of others, without judgement, helped me and I want to continue doing theatre") and get in touch with other women facing the same challenges. 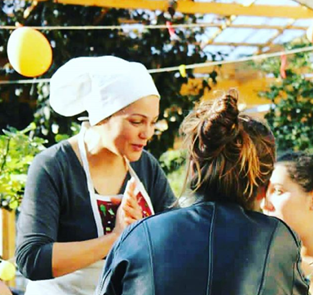