Get confident through drama, movement and storytelling

An online theatrical process: Get confident through drama, movement and storytelling in Hungary

During May-June 2021, we worked with 14-16 immigrant women living in Hungary, online for 5 sessions, recruiting mainly through emails and Facebook, in groups and through a separate Facebook event.

We met online (via Zoom) for 5 sessions, lasting 2.5 hours each with one short break. We worked in small groups, in a large group and in pairs as well. At the end of the process the groups presented the scenes to each other, without any external audience. Image theatre, improvisation, movement, working with accents, creating short scenes in small groups based on real experiences.

The aim: community building, exploring and sharing difficulties, self-reflection, collective reflection on how to improve. In the end, participants pointed out discovering differences and similarities, exploring different perspectives as learning points. This also referred to each other's stories and understanding the actors on the other side in conflict situations.

Theatre of the Oppressed wants to give people the tools to change their often difficult realities, to change their lives for the better, to have new ideas and to find new solutions. 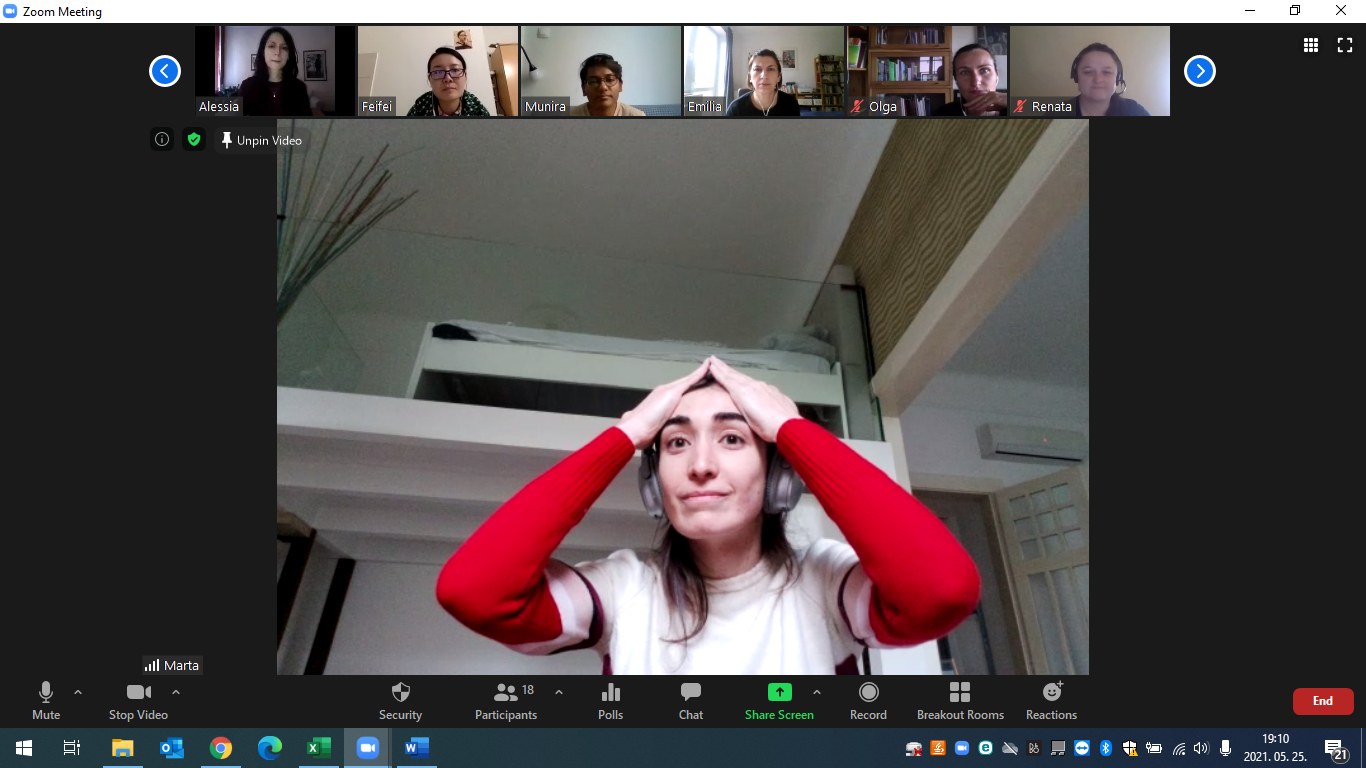 The online workshops are an opportunity for women who may not live in Budapest or who, for some reason (family circumstances, insecurity, anxiety), find it difficult to leave their homes. Several of them also expressed that they feel safer in their homes and therefore feel more comfortable sharing deeper content and stories with the group, and find it easier to try something new - like the theatre.

One of our participants in the final evaluation: "Basically the process was a good experience, because I'm usually a very shy person, I'm afraid of acting, of making a sound or moving and stuff like that. The online format probably helped, because it allowed me to be with other people and be alone at the same time. I think it was more comfortable for me. I was probably more confident because of the online format."

Workshop at home – brings both security and uncertainty as well

Often there is someone else in the space and the group may not notice this, a voice may accidentally echo in, a figure may pass in the background, or a participant may say that they don't want to speak very loudly, so their partner in the other room doesn't think something strange about them.

However, engagement can also be weaker because of the online format: it is easier to jump in and out, work in parallel, type in a chat that I have to go, the stakes are lower for a leaving than if I have to leave an actual training room, and attention can only be maintained for much shorter periods. It's like switching between channels on a TV, if the programme isn't exciting enough, the participant switches to another channel. This made it difficult to keep the group dynamics stable on many occasions, and it is also often difficult to tell whether someone is tired and disconnected on purpose or has dropped out due to poor internet connection, but will come back at some point. 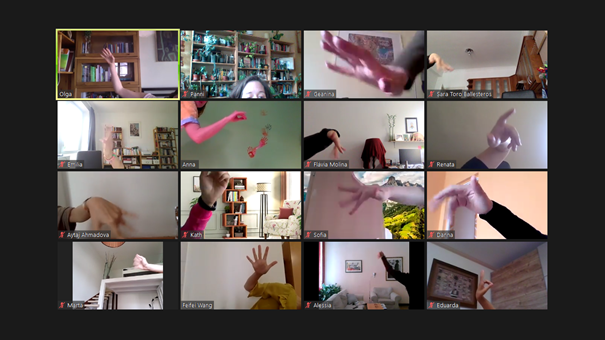 Exercises – up- and downsides

Small group schedules are much more direct, you can't leave it to the group to find a pair for themselves, according to their mood or who they haven't been with before. It's up to the facilitators to make sure there is a diverse schedule and that there is a small group at all, or speed dates in pairs, a few minutes to make up for spontaneous conversations and connections which could happen in real life during a break.

What it clearly a downside is that the appreciation of humour, and often even its presentation is very limited. It came up when we were working on sketches that, although they presented difficult topics, were often very humorous. Although at the beginning of the process, contrary to the conventions, we asked the participants not to mute their microphones if possible when there was no noise around, so that it might be easier to contribute to the group discussions, but out of habit and politeness, usually everyone muted themselves. But this way, the players could not hear the giggles and laughter, which are affirming and give a sense of achievement. Also what was lost in group chats were the affirmative hums, just a noise to confirm someone, that there is room for their opinion.

The online space has its own rules, and it takes away the possibility for a whole body presence, we see only a torso or bust of the group in general, but often we enter the participant's home, intimate space. In visual theatre, it is also important that the participants make sculptures of the whole body, and this was quite difficult to make them together. It was also difficult for them to play with proximity - distance, we are so used to being seated in front of a screen, it was difficult to break out of this frame.

The entrance, unlike in physical space, cannot be controlled, someone is either not inside or immediately in the circle. If someone enters an actual room late, there is a chance to signal to them that the group is in a process, wait a little, let them know when they can join. On zoom if they have entered the circle, they are immediately in completely, there is no gradualness, no arrival, you can't sit down at the edge of a physical room and wait for the end of the exercise, someone is either out or in, there is no transition, this is difficult to manage even with two trainers.

At Artemisszió we work in pairs with groups anyway, at certain moments in the online group process this was key. We were able to be each other's technicians, taking notes while the other was very attentive to make sure that everyone was speaking (in the face-to-face presence, going around helps a lot to make sure that no one is left out of a line, in the online space you have to pay special attention to this, writing an order in the chat, noticing if someone arrived in the meantime, etc.). Whoever is not facilitating can assign breakout rooms or send in a chat the next online question that the group will use for the task, the keyword of the topic at hand, a bit like writing on the board while the other person is speaking, but they also have the opportunity to answer questions that arise in the chat.

What is even more important - and this requires a very detailed review and discussion of the program plan - if one trainer drops out of the process he or she is leading due to a weak internet connection, for the other to be able to take over and lead until the drop-out is reconnected. This has happened to both of us. 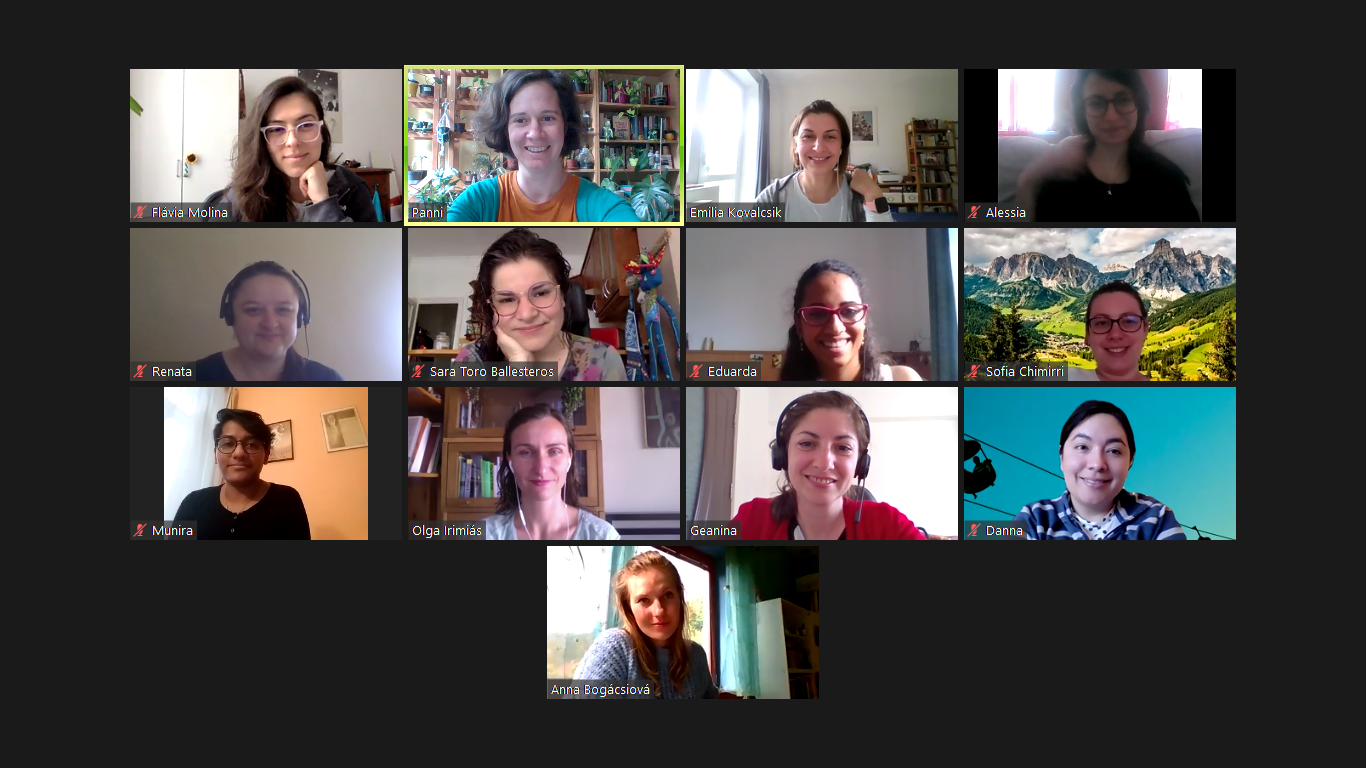